OK Boomers, Slackers, Karens, Unicorns, and Snowflakes: Can’t We All Get Along?

With four primary generations now coexisting in the workplace, it’s not surprising that a few generational feuds are brewing and bubbling.

Boomers (born roughly between 1946-1964) mock millennials (1977-1997) for expecting participation trophies and being like Peter Pan (never wanting to grow up), while millennials think Boomers are out of touch. Gen X (1965-1976), once viewed as the slacker generation, now paints millennials as the new slackers – often referring to them as unicorns and snowflakes who are entitled and challenging to manage. Gen Z (born after 1997) are portrayed as disloyal job-hoppers who are addicted to their phones and unable to handle face-to-face interaction. They have taken to calling Gen X the "Karen" generation – a privileged, irritating, and entitled generation brought up by Boomers. 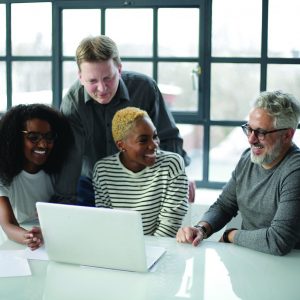 Photo by Andrea Piacquadio from Pexels

All of this back-and-forth sparked this year’s viral two-word dismissal by millennials and Gen Z: “OK Boomer." The phrase, typically used to respond to anyone over 30 who says something condescending about the younger generations, quickly went mainstream. The backlash phrase implied that Boomers are out of touch and don't understand millennial and Gen Z culture or politics. Boomers, on the other hand, saw the expression as an example of ageism.

Pitting one generation against the next isn’t new. As Aristotle put it in Rhetoric: “[Young people] are high-minded because they have not yet been humbled by life, nor have they experienced the force of circumstance…They think they know everything and are always quite sure about it.”

No matter where you fall on the generational spectrum, the recent online feud is a good reminder for all generations that there are fallacies in stereotypes and dangers in discounting the contributions, strengths, and ideas of others not like you.

The next time you're faced with working with someone older or younger than you and are tempted to brush their generation off with a negative comment, try instead to understand differences. Different doesn't have to mean bad, so take time to focus on strengths and preferences. Allow their strengths to improve your weaknesses, and vice versa.  Each generation is an integral part of successful teams and companies, so ignoring differences and problems isn't an option, especially today, when Boomers are actively choosing to stay in the workforce longer, and millennials make up the largest segment in the workplace.

WAHVE started its entire business on the idea that combining the knowledge and skills of the retiring and retired workers with the fresh perspectives of the younger generation is a winning combination. And that's proven: statistics show that companies that employ an age-diverse workforce have higher productivity, a wealth of new ideas, and a broad knowledge base.

Sharon Emek, Ph.D., CIC, is the founder and CEO of Work At Home Vintage Experts (WAHVE). WAHVE is an innovative contract talent solution that matches retiring, experienced insurance, accounting, and human resource career professionals with a company's talent needs. WAHVE bridges the gap between an employer's need for highly skilled professional talent and seasoned professionals desiring to extend their career working from home. From screening to placement, WAHVE is a comprehensive solution to qualifying, hiring, and managing experienced remote talent.