The Story of Frank T. Priest

"The Association was founded to develop better agents to better serve the citizens and industries of Kansas and promote a better relationship between member agents and the insurance companies they represent. Due to pioneers' efforts, the dedicated officers and committee members, and the quality of the member agents, the Kansas Association of Insurance Agents today is one of the great associations that makes up the National Association of Insurance Agents," wrote Frank Priest. Frank was one of the “Four Horsemen” and an early organizer of the Association.

Frank has served on the Executive Committee of the KAIA in 1927 and 1928 and was Vice President in 1939. He was elected to the National Executive Committee and served on it in 1927-1930 and 1934-1936. National President Allen Wolff sent a wire to the convention in 1933 that Frank Priest had been appointed Chairman of the Finance Committee of the National Association. His recognition of this honor was acknowledging the National Organization's debt to KAIA, whom they consider one of their most loyal members. In 1938 the KAIA named an award for him. It was called the “Frank Priest Award” and presented at the annual convention for outstanding service by a local board. Frank was made an Honorary Life Member in 1952. In 1958 Frank was selected the "Insurance Man of the Year.

He was well known for his speech and toasts. In 1932 he honored his friend, Rosse Case, who was unable to attend the convention that year of his presidency due to illness. He spoke of the outstanding leadership Rosse provided to the Association and conceded that his health had been affected by his efforts. He stated: "I, therefore, move that we extend a raising note of appreciation, love, and respect to Rosse Case." Aviation Insurance was the subject of his address given in 1929 at the convention. He stated: "This will have a huge impact on the insurance business in the near future." He was one of the speakers at the convention in 1950 and installed the officers at the convention in 1961. In 1970, Frank was given the honor of proposing a champagne toast at our "50th Golden Anniversary Convention. Frank was in great demand throughout the country as an inspirational speaker on behalf of the insurance business.

Frank was also honored for all the articles that he wrote. In 1949 he wrote a series of eight articles in the newsletter. The first was titled "Serving Two Masters – The Customer and the Company." These were signed the "Voice of Experience." These articles remained anonymous until the end of the series when it was revealed they were written by Frank. In 1950 he had an article titled "Competition!!! It Can Be the Spice of Life". In 1960 he wrote an article titled "Frank Priest Discusses Hard Times." All of these articles are in our history files. 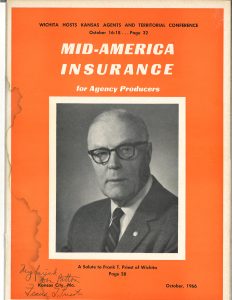 The Mid-America Insurance Magazine saluted Frank for his service to his industry, his community, and mankind. His picture was on the cover. The article stated that this was a unique salute to an "only one of his kind" man. He was honored for his military service during World War I. When the war was declared, he was one of the first to enlist. Overseas, became a Captain of Battery A., 130th Field Artillery, 35th Division, was wounded in the Argonne Forest in France and awarded a Purple Heart. In 1956, he was honored by the National Conference on Christians and Jews for his distinguished contributions to good human relations among all men.